The Dead End Kids were a group of young actors from New York City who appeared in Sidney Kingsley's Broadway play Dead End in 1935. In 1937, producer Samuel Goldwyn brought all of them to Hollywood and turned the play into a film. They proved to be so popular that they continued to make movies under various monikers, including the Little Tough Guys, the East Side Kids, and the Bowery Boys, until 1958.

In 1934, Sidney Kingsley wrote a play about a group of children growing up on the streets of New York City. Fourteen children were hired to play various roles in the play, including Billy Halop (Tommy), Bobby Jordan (Angel), Huntz Hall (Dippy), Charles Duncan (Spit), Bernard Punsly (Milty), Gabriel Dell (T.B.), and Leo and David Gorcey (Second Avenue Boys). Duncan left for a role in another play before opening night, and was replaced by Leo, his understudy. Leo had been a plumber's assistant and was originally recruited by his brother David to audition for the play.[1]

The play opened at the Belasco Theatre on October 28, 1935, and ran for two years, totaling 684 performances. Samuel Goldwyn and director William Wyler saw the play and decided to turn it into a film. They paid $165,000 for the rights to the film and began auditioning actors in Los Angeles.[2] Failing to find actors who could convey the emotions they saw in the play, Goldwyn and Wyler had six of the original Kids (Halop, Jordan, Hall, Punsly, Dell, and Leo Gorcey) brought from New York City to Hollywood for the film. The Kids were all signed to two-year contracts, allowing for possible future films, and began working on the 1937 United Artists' film, Dead End. The actual name of the gang of boys in Dead End is written in chalk on the wall shown throughout the movie. It reads: "East 53rd Place Gang Members Only". During production, the boys ran wild around the studio, destroying property, including a truck that they crashed into a sound stage. Goldwyn chose not to use them again and sold their contract to Warner Bros.[3]

Warner Bros. had initially attempted to rename them the "Crime School Kids" through advertisements for their first two films produced there, starting with Crime School (1937), to disassociate them from their previous studio's film, and promote their own. In 1938, they made their only color appearance in a short film, Swingtime in the Movies, and were referred to as that name. This was all in vain, though, as the name never caught on, and they remained the Dead End Kids.[3]

At Warner Bros., the Dead End Kids made six films, including Angels with Dirty Faces, with some of the top actors in Hollywood, including James Cagney, Humphrey Bogart, John Garfield, Pat O'Brien, and Ronald Reagan. The last one was in 1939, when they were released from their contracts owing to more antics on the studio lot.

Shortly after they made their first film at Warner Brothers in 1938, Universal borrowed all of the Dead End Kids except for Bobby Jordan and Leo Gorcey and made twelve films and three 12-chapter serials under the team names of "The Dead End Kids and Little Tough Guys" and "Little Tough Guys". Universal also contracted Leo's brother David and Hal E. (Hally) Chester to join the team. After Warners released Jordan from his contract, Universal quickly signed him to join the rest of gang.

Because the original Dead End Kids were now working for several studios, their Universal films were made at roughly the same time as the Warner Brothers' "Dead End Kids" series and, later, Monogram Picture's "The East Side Kids" series. The final Universal film was Keep 'Em Slugging, released in 1943.

After Warner Brothers released the remaining Dead End Kids from their contracts in 1939, producer Sam Katzman at Monogram acted quickly and hired several of them, including Jordan and the Gorcey brothers, as well as Chester and some of the other Little Tough Guys to star in a new series using the name "The East Side Kids". This series introduced 'Sunshine' Sammy Morrison, one of the original members of the Our Gang comedy team, to the group.

A total of 22 East Side Kids films were made, ending with Come Out Fighting in 1945.

In 1946, with only Monogram making films using any of the original Dead End Kids, Huntz Hall, Leo Gorcey, and Gorcey's agent, Jan Grippo, revamped The East Side Kids, renaming them "The Bowery Boys". These films followed a more established formula than the earlier films. First Jordan and then Dell departed the series after several films. Gorcey left after the 41st film and was replaced by Stanley Clements for the remaining films. In all, a total of 48 Bowery Boys films were made, ending with 1958's In the Money. During the series Hall and Dell did a nightclub act together. Gorcey and Hall reteamed on the film Second Fiddle to a Steel Guitar then finally, in The Phynx. 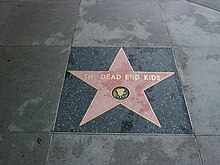 The Dead End Kids' star on the Hollywood Walk of Fame

In total the various teams that began life as "The Dead End Kids" made 89 films and three serials for four different studios during their 21-year-long film career. The team was awarded a star on Hollywood's Walk of Fame that can be found at the corner of La Brea and Hollywood.

One notable aspect of the group's history is their transition from stark drama to comedy. When they began, in Dead End and their other early films, their characters were serious, gritty, genuinely menacing young hoodlums. But, by the height of their career, their movies were comedies, with the Kids depicted as low-class but basically harmless, likable teens – comic caricatures of their former selves.

The original play has had two revivals. A 1978 adaptation played at the Quigh Theatre in New York, N.Y. and another in 2005 at the Ahmanson Theatre in Los Angeles.[2]

Bernard Punsly in the trailer for Little Tough Guy (1938)