New Jack City is a 1991 American crime thriller film based upon an original story and written by Thomas Lee Wright and Barry Michael Cooper, and directed by Mario Van Peebles in his directorial debut as he also co-stars in the film. The film stars Wesley Snipes, Ice-T, Allen Payne, Chris Rock, Mario Van Peebles, Judd Nelson, and Bill Cobbs. The film was released in the United States on March 8, 1991.[2]

Nino converts the Carter apartment complex into a crack house. Gee Money and Keisha kill rival Fat Smitty, the CMB throws out the tenants, and Nino forces the landlord out onto the streets naked. Meanwhile, undercover detective Scotty Appleton attempts to make a deal with stick-up kid Pookie, but Pookie runs off with the money. Appleton chases Pookie and shoots him in the leg, but the police let him go. Nino's gang successfully run the streets of Harlem over the next three years.

When Det. Stone comes under pressure, Appleton volunteers to infiltrate Nino's gang and is partnered with loose-cannon Nick Peretti. Elsewhere, mobster Frankie Needles attempts to collect taxes from Nino, who refuses to pay. While Appleton and Peretti spy on Nino and his gang as they hand out Thanksgiving turkeys to the poor, Appleton spots Pookie, now a crack addict, as the man beats his junkie girlfriend. Instead of arresting him, Appleton gets Pookie into rehab. Later Pookie offers to help bring down Nino. Against his better judgment and the disapproval of Stone and Peretti, Appleton recruits Pookie as an informant in the Carter.

When Pookie relapses, Gee Money realizes that he is wired, and he orders the Carter destroyed. The cops find Pookie's bloody corpse, but it is booby-trapped; Peretti defuses the explosives seconds before it explodes. Angry, Nino warns Gee Money not to make such a costly mistake again.

After Pookie's funeral and no longer needed by Stone, Appleton and Peretti go undercover as drug dealers. After bribing Frankie Needles, Appleton infiltrates the CMB, due in part to Gee Money's increasing ambition and drug use. Though Nino distrusts them, he agrees to do business. After relating an anecdote about his own violent initiation into a gang, Nino warns that he will kill both Appleton and Gee Money if there are any problems.

Appleton gains Nino's trust when he reveals information about Gee Money's side deal and saves Nino from a gun-toting old man who had earlier appealed to police for help against Nino. While Nino, Appleton, and the CMB attend a wedding, Peretti sneaks into Nino's mansion to collect evidence.

Don Armeteo sends hitmen to assassinate Nino, and a massive shootout erupts between the CMB and his hitmen. When Nino uses a child as a shield, Appleton attempts to shoot Nino behind his back. Keisha is gunned down as she sprays bullets into the hitmen's van as they escape. Later, Selina condemns Nino for his murderous activities, and Nino throws her out. Nino later kills Don Armeteo and his crew from a speeding motorcycle in retaliation for the wedding shootout.

Stone, Appleton and Peretti arrange a sting operation to nab Nino. Kareem, who knows that Appleton and Pookie were connected, blows Appleton's cover, and a shootout ensues. Peretti saves Appleton by killing the Duh Duh Duh Man, and Nino escapes. That night, Nino confronts Gee Money, who accuses Nino of egotism, and Nino regretfully kills him. After the gang's collapse, Nino holes up in an apartment and continues his criminal empire solo. Scotty and Nick assault the complex, and Scotty brutally beats Nino, revealing that it was his mother that Nino killed in his gang initiation. Nick talks Scotty out of killing Nino, who is taken into custody amid threats of retaliation.

At his trial, Nino pleads guilty to a lesser charge, claims to have been forced to help the gang due to threats, and identifies Kareem as the leader. When Nino is sentenced to only one year in jail, Scotty is outraged. As Nino speaks with reporters outside of the courtroom, the old man again confronts Nino and shoots him in the chest. Scotty and Nick are both satisfied as Nino falls over the balcony to his death. As onlookers look down at Nino's body, an epilogue states to the viewers that decisive action must be taken to stop real-life Nino Brown analogues.

The film is based upon an original story and screenplay written by Thomas Lee Wright.[3][citation needed] According to Carl Hart, who corresponded with Wright following Hart's criticism of New Jack City, the screenplay was originally written as The Godfather: Part III, and featured a protagonist who sold heroin rather than cocaine.[4] Wright later wrote, directed and produced Eight Tray Gangster: The Making of a Crip, a documentary of gang life in South Central Los Angeles.[5][citation needed]

The screenplay was co-written by Barry Michael Cooper, formerly an investigative reporter with the Village Voice. He also wrote the screenplays for the dramatic films Above the Rim (1994) and Sugar Hill (1994). The latter film also starred Snipes.

Cooper's rewrite was adapted from his December 1987 The Village Voice cover story entitled "Kids Killing Kids: New Jack City Eats Its Young," about the drug war in Detroit.[6] The account referred to the 20th anniversary of the 1967 riots in Detroit, and in its wake, the rise of crack cocaine gangs in the late 1980s, such as Young Boys Inc., and the Chambers Brothers. 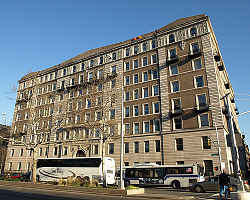 Harlem's real life Graham Court, known in the film as the "Carter".

New Jack City received a favorable reception by film critics for its cast, storyline, and soundtrack.[7] Roger Ebert of the Chicago Sun-Times gave the film three and a half stars out of four, writing:

Truffaut once said it was impossible to make an anti-war movie, because the war sequences would inevitably be exciting and get the audience involved on one side or the other. It is almost as difficult to make an anti-drug movie, since the lifestyle and money of the drug dealers looks like fun, at least until they're killed. This movie pulls off that tricky achievement. Nino, who looks at the dead body of Scarface and laughs, does not get the last laugh.[8]

Time Out London described the film as "a superior example of what used to be called blaxploitation."[9]

The New Orleans-based Rap label Cash Money Records is named after the Cash Money Brothers gang.[12] Cash Money Records rapper Lil Wayne has a series of albums titled Tha Carter after The Carter Complex,[13] and Lil Wayne and Tyga have referred to themselves as Young Nino.[14][15] Wrestler New Jack got his name from this movie.[citation needed] Comedian Gary Gulman refers to the movie in his Comedy Central special "In This Economy," when ranting against the now defunct Blockbuster video stores and their late fee policies.[16]

Deadline announced that Warner Bros are rebooting the film with Malcolm Mays writing.[17]