The program was funded in part by the Ford Foundation, who characterized it in 1970 as "the only nationally televised weekly series oriented to the black community and produced by blacks."[4]

WNDT aired the first in a series of 39 one-hour programs entitled Soul! on Thursday, September 12, 1968. The program was video-taped inside WNDT's then-West 55th Street Studios in Manhattan. The two original co-hosts on that premier show were Alvin Poussaint, the noted black Harvard psychologist, and educator Loretta Long, who, one year later, took on the role of Susan Robinson on Sesame Street. Poussaint is well known for his research on racism's effect in the black community. Poussaint is a noted author, public- speaker, and television consultant. His work in psychology is influenced greatly by the civil rights movement in the South, which he joined in 1965. 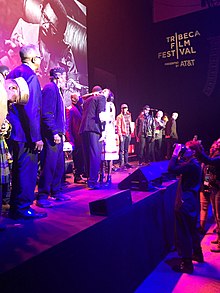 Mr. SOUL! The Movie Premiered at The Tribeca Film Festival

Poussaint and Long hosted four more shows together afterwards. On October 24, 1968, Poussaint was replaced by the show's creator, Ellis Haizlip, an openly gay African American closely associated with the Black Arts Movement.[3] Haizlip and Long would co-host the show through December 5, 1968, after which Haizlip became the sole host. Poet Nikki Giovanni was also a frequent host.[5] The show lasted until March 7, 1973.

Its viewership in the African American community was enormous: a 1968 Harris poll estimated that more than 65% of African American households with access to the show watched it on a regular basis.[3] In 1970 it was carried by 72 public television stations.[4]

Gayle Wald writes that "Soul! offered viewers radical ways of imagining—of hearing, feeling, and seeing—black community. Musically speaking, Soul! refused the division of black arts into high and low culture: the music of the concert hall versus the music of the Apollo. Soul! made room for both…"[3]

Ivan Cury was the staff director for the program until 1970, when Stan Lathan, father of actress Sanaa Lathan, assumed the directing position. Producers included actress Anna Marie Horsford, later known for her roles in Amen and The Wayans Bros. television series. Occasional host Loretta Greene later appeared in the movies Black Girl and Solomon Northup's Odyssey in 1984, the original version of 12 Years a Slave.

On April 22, 2018, a documentary film about Ellis Haizlip, Mr. SOUL!, directed, produced and written by his niece Melissa Haizlip, premiered at the Tribeca Film Festival in New York, New York. The award winning film, was released in limited theaters and virtual cinemas on August 28, 2020. As of December 2020, the film has won 19 awards including 14 film festival awards.[8] [9][10] The documentary premiered on PBS on February 22, 2021.