Great Bend is a city in and the county seat of Barton County, Kansas, United States.[5] It is named for its location at the point where the course of the Arkansas River bends east then southeast.[6] As of the 2020 census, the population of the city was 14,733.[2] It is home to Barton Community College.

Prior to American settlement of the area, the site of Great Bend was located in the northern reaches of Kiowa territory.[7] Claimed first by France as part of Louisiana and later acquired by the United States with the Louisiana Purchase in 1803, it lay within the area organized by the U.S. as Kansas Territory in 1854.[8][9] Kansas became a state in 1861, and the state government delineated the surrounding area as Barton County in 1867.[9][10]

The first settlers of the area arrived in 1870. Living in sod houses and dugouts, they worked as buffalo hunters since trampling by bison herds precluded crop farming.[11] In 1871, the Great Bend Town Company, anticipating the westward construction of the Atchison, Topeka and Santa Fe Railroad, founded Great Bend at a site roughly three miles west of Fort Zarah on the Santa Fe Trail.[11][12] They named the settlement after its location at the "great bend" in the Arkansas River where the river's course turns eastward.[6] The town began to grow as more settlers arrived over the following year and opened several businesses. 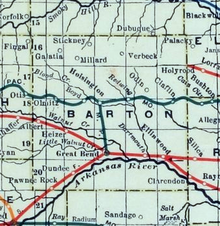 The railroad reached Great Bend in July 1872, and an election at about the same time declared the town the permanent county seat.[10] Great Bend was incorporated as a city soon thereafter. The county courthouse and the city's first public school were built the following year.[12]

In 1873, following the arrival of the railroad, Great Bend became a shipping point for cattle.[12] This stimulated local business but also transformed the city into a rowdy, violent cowtown.[11] In 1876, the Kansas Legislature extended the legal "dead line" restricting the presence of Texas cattle 30 miles west of Barton County. The cattle trade moved westward accordingly, and the city became more peaceful.[12]

Over the following decades, Great Bend continued to grow and modernize, becoming a center of area commerce. This was despite two disasters which struck the city: a downtown fire in 1878 and a smallpox outbreak in 1882 which resulted in a brief quarantine.[12] In 1886, local speculators began to fund exploration for petroleum in the area. By 1930, the oil and gas industry brought more than $20 million annually to the county.[13] More than 3,000 wells produced during the 1930s, and the influx of workers dramatically increased the city's population.[11]

The U.S. Army Air Forces opened Great Bend Army Airfield west of the city in 1943. The base served as training facility for B-29 bomber aircraft personnel during World War II.[14] After the war, the City of Great Bend acquired the base and repurposed it for civilian use as Great Bend Municipal Airport.[15]

The city continued to grow through the 1950s, its population peaking at almost 17,000 in 1960. In 1973, the Fuller Brush Company relocated its production facilities to Great Bend, becoming one of the city's major employers. Despite a modest decline in population in recent decades, Great Bend continues to serve as a commercial center for central Kansas.[11]

Lying in the Great Bend Sand Prairie region of the Great Plains, the city is situated on the north side of the Arkansas River where the river's course shifts from northeast to southeast.[18][19] Dry Walnut Creek, a tributary of nearby Walnut Creek, flows east along the northern edge of the city.[20] Cheyenne Bottoms, a large inland wetland, is located approximately 6 miles (9.7 km) to the northeast.[21]

Located near the convergence of North America's humid continental (Köppen: Dfa), humid subtropical (Köppen: Cfa), and semi-arid (Köppen: BSk) climate zones, Great Bend experiences hot summers and cold, dry winters.[23] On average, January is the coldest month, July the hottest and May is the wettest. The hottest temperature recorded in Great Bend was 111 °F (44 °C) in 1980; the coldest temperature recorded was -21 °F (-29 °C) in 1989.[24]

Great Bend receives 27 inches (690 mm) of precipitation during an average year, and there are, on average, 71 days of measurable precipitation each year.[24][25] The average relative humidity is 67%.[26] Annual snowfall averages 17 inches (43 cm). Measurable snowfall occurs an average of seven days a year with at least an inch of snow being received on six of those days. Snow depth of at least an inch occurs an average of 23 days a year.[25]

Agriculture is the predominant industry in Great Bend, and its grain elevators are visible from miles away. The oil industry flourished from about 1930–1960. There was even an oil well in the city park. But this industry has been on the decline for years. Cattle raising is also an important source of income for many people.

As of 2012, 66.5% of the population over the age of 16 were in the labor force. 0.0% were in the armed forces, and 66.5% were in the civilian labor force with 61.0% employed and 5.5% unemployed. The composition, by occupation, of the employed civilian labor force was: 30.2% in management, business, science, and arts; 27.8% in sales and office occupations; 19.2% in service occupations; 9.6% in natural resources, construction, and maintenance; 13.3% in production, transportation, and material moving. The four industries employing the largest percentages of the working civilian labor force were: educational services, health care, and social assistance (27.3%); retail trade (11.9%); manufacturing (9.8%); and arts, entertainment, recreation, and accommodation and food services (9.8%).[27] Great Bend Public Schools, Barton Community College, and CUNA Mutual Retirement Solutions are the city's three largest employers. Other major employers include local government, local hospitals, Wal-Mart, Superior Essex, and Fuller Brush Company.[28]

Great Bend is a city of the second class with a mayor-council form of government.[30] The city council consists of eight members, two elected from each city ward for two-year terms. The mayor is elected at-large, also for a two-year term. The mayor and city council together constitute the city's Governing Body which sets goals, establishes policies, and approves all ordinances and resolutions.[31] The council meets on the first and third Monday of each month.[30]

As the county seat, Great Bend is the administrative center of Barton County. The county courthouse is located downtown, and most departments of the county government base their operations in the city.[32]

Great Bend was located on the National Old Trails Road, also known as the Ocean-to-Ocean Highway, that was established in 1912.[citation needed] Currently, two U.S. Highways and two Kansas state highways pass through the city. U.S. Route 281 runs north–south through Great Bend, intersecting U.S. Route 56, K-96, and K-156 which run concurrently east–west through the city. K-96 splits from U.S. 56 and K-156 in western Great Bend, exiting the city to the northwest. U.S. 56 and K-156 continue concurrently west, then turn south and ultimately southwest.[38]

A Kansas and Oklahoma Railroad line runs east–west through the city with a second line branching off to the northwest, paralleling K-96.[20]

The city government's Public Works Department is responsible for water distribution, waste water treatment, and sewer maintenance. One of the few cities in the area not to have a water treatment plant or water tower, Great Bend obtains its water supply directly from ten wells located throughout the city.[41] Waste water is treated and recycled at the city's Wastewater Treatment Facility and then emptied into the Arkansas River.[42] Two regional energy cooperatives, Midwest Energy, Inc. and Wheatland Electric, provide electric power.[43] Local residents primarily use natural gas for heating fuel; Midwest Energy and Kansas Gas Service both provide natural gas service.[29][43]

The Great Bend Tribune is the city's daily newspaper with a circulation of over 6,200 copies.[46]

The Interrobang was the student newspaper at the Great Bend-based Barton Community College.

The city government's Park Department maintains 10 parks in the city.[50] The two largest are Brit Spaugh Park and Veteran's Memorial Park. Located in the north-central part of the city, Brit Spaugh Park includes the Great Bend Zoo, the Wetlands Aquatic Center, two softball fields, horseshoe courts, picnic areas, playgrounds, a skateboarding area, and a BMX track. Veteran's Park is located in the northwestern part of the city and includes an 18-hole disc golf course, a fishing lake with limited boating, sand volleyball, ballfields, a playground, and walking trails. The department also maintains hiking and biking trails along flood control levies around the city along with Stone Lake, a 43-acre (17 ha) fishing lake immediately south of the city.[51][52]

The Club at StoneRidge, located on the northern edge of the city, includes a private, 18-hole golf course that opened in 1940. A second 18-hole course, the Lake Barton Golf Course, lies approximately 5 miles (8.0 km) north of the city.[53]

From 1947 to 1989, Great Bend was the home of the Argonne Rebels Drum and Bugle Corps. Under the direction of Glenn and Sandra Opie, the corps achieved national fame, most notably winning the American Legion national championships in 1971, 1972, and 1973.[54] The Rebels were one of the thirteen founding member corps of Drum Corps International, finishing in 5th place in 1972 and 11th in 1973.[55]

Greyhound racing got its start in the United States in the bottoms in 1886 during a formal coursing event.[58]

The first nationwide NHRA sponsored event called "the Nationals" was held in 1955, in Great Bend, Kansas at the Great Bend Municipal Airport.[59]

In popular culture and the arts

Harold Lloyd's character in the 1923 film Safety Last comes from Great Bend before moving to the big city.

In November 1959, Perry Smith and Richard Hickock stopped for dinner in Great Bend on their 400-mile journey to Holcomb, Kansas, where they murdered the Clutter family.[60] Author Truman Capote wrote In Cold Blood about the murder.[61]

In the 1993 novel, The Death and Life of Superman by Roger Stern, Jonathan and Martha Kent fly from the Metropolis airport to the Great Bend airport and proceed to drive to Smallville,[62] which would put Smallville somewhere in central Kansas.

Great Bend was mentioned briefly in the 2006 CBS Drama Jericho.

Great Bend is the setting for the Hulu original comedy series Quick Draw, created by and starring John Lehr.