Swing! is a 1938 American race film directed, produced and written by Oscar Micheaux.

Mandy Jenkins (Cora Green), an African American cook for a wealthy white family in Birmingham, Alabama, discovers her husband Cornell is having an affair with Eloise Jackson (Hazel Diaz). When she confronts her husband and Eloise at a nightclub, a violent fight ensues. Eloise leaves Birmingham and relocates to the Harlem section of New York City, where she gets a job as a cabaret vocalist under the false name of Cora Smith. She is followed to Harlem by her husband, Lem, who becomes mixed up in the local crime scene. Mandy also arrives in New York, having left Cornell. She gets a job as the wardrobe mistress at the cabaret where Eloise is performing. When Eloise breaks her leg during a drunken fall, Mandy is recruited as the last-minute substitute and becomes a musical star as the revue is transferred to Broadway. Cornell, who is now destitute, reunites with Mandy and agrees never to cheat on her again.[1] 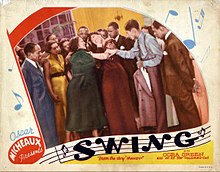 Actress Dorothy Van Engle, who had a supporting role as an assistant producer, is credited for inventing a key scene in Swing!, where her character and Mandy are sewing together. Van Engle, who was also a seamstress, created her own clothing for the film.[3]

Elvera Sanchez Davis, the mother of entertainer Sammy Davis, Jr., had a small role in Swing! as a tap dancer.[4]

Swing!, which is a public domain title, has been frequently shown in film festivals and retrospective series celebrating the creative output of Oscar Micheaux, a pioneering African-American filmmaker,[5] and it has also been broadcast on U.S. television in programming devoted to the history of African-American cinema.[6]